The instant you hear the most powerful, naturally aspirated, 4.0L flat-six wailing to its 9,000 RPM redline; you’ll quickly melt into a puddle of automotive bliss. In fact, what the sports car fanatics at Porsche have created is a 911 that is without question a thinly disguised racecar. One that you can drive to the racetrack, set incredible lap times in, and then comfortably use to be home in time for dinner. The 911 GT3 RS is purpose-built for the racetrack and it stands head and shoulders above all other cars that claim to be track-ready vehicles. It sets a new standard in analog driver connection that makes other vehicles that claim to be track-ready feel like their hands are tied behind their back.

The Porsche GT3 RS is the best track car in the world.

Yes, the Porsche 911 GT3 RS is indeed the undisputed king of the racetrack, and today we’re going to stake our case for this fact by explaining the virtues of this, the most hardcore of 911 sports cars. In the article, we’re going to cover everything you need to know about the GT3 RS:

So let’s hop on the track and learn more about what makes this the most incredible 911 to ever roll out of Stuttgart.

The History Behind The Porsche GT3 RS

To really understand where the Porsche 911 GT3 RS, we need to delve back into the storied history of Porsche’s most hardcore sports cars. In essence, there would be no 991.2 versions of the GT3 RS if it weren’t for one particular car: The 1973 Carrera RS 2.7. It was the first 911 that was specifically created for FIA Group 4 Regulations and it was the first 911 that was purpose built to be on a track but still be comfortable enough to be driven on a daily basis. This is the formula that the current 991.2 GT3 RS followed and perfected 35 years later. 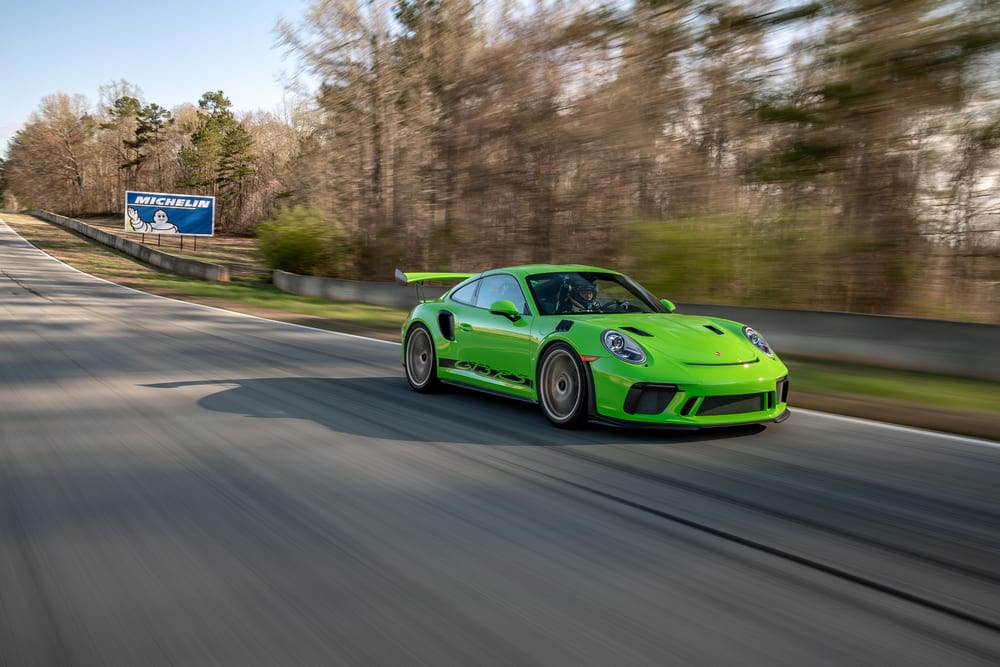 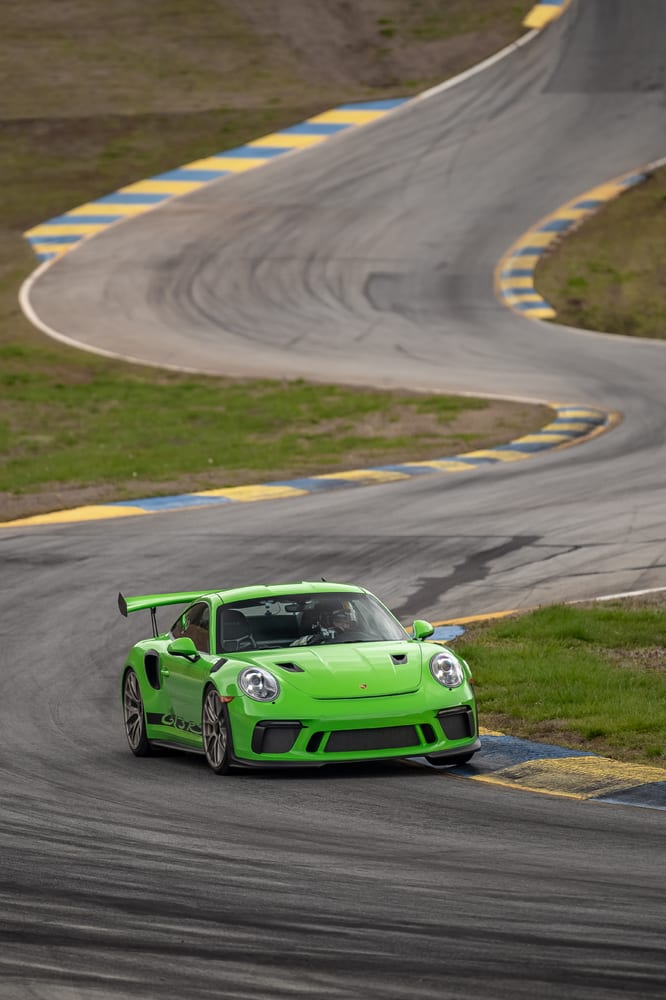 In 2000, Porsche unleashed the very first Porsche GT3, which was so named  because it was inspired by the FIA sanctioned Group GT3 racing series that was being cultivated at the time. In order to participate in GT3, manufacturers needed to produce a road car equivalent with strict guidelines and the 996 GT3 was the first to make this transition. Subsequent generations would utilize the same formula: lightweight, active aerodynamics, hardcore suspension, and a naturally aspirated flat-six.

GT3 RS models made their introduction in 2004, offering an incredibly hardcore package-built from parts destined for the Porsche GT3 RSR racecar. Things like a carbon fiber hood, carbon-ceramic brakes, and active cooling started to become standard kit on RS-specific models. Every redesign of the 911 and GT3 would bring another version of the RS and in 2019, the current generation made its debut.

First and foremost, let’s talk about what really makes the Porsche 911 GT3 RS a stand out machine; it’s herculean, operatic, 4.0L flat-six engine that puts out a massive 520 horsepower and 346 lb. ft. of torque! Even more incredible is that this performance monster pulls off these amazing numbers without the assistance of turbochargers. Yes, you heard me right, the 520 horsepower under the beck and call of your right foot is purely driven by deep breathing and featherweight engine components that allow this motor to scream all the way to a thrilling 9,000 RPM redline. So, how fast is the 911 GT3 RS? How about 0-60 in 2.9 seconds, 0-100 in 6.6 and a standing ¼ mile time of 11 seconds flat @ 129 MPH! The sound can only be described as a “maniac thunder” that’s belted into the atmosphere through a titanium exhaust system.

Putting the power to the rear wheels (did you expect anything less from a Porsche?) is their most hardcore version of the PDK, which stands for Porsche Doppel Kupplungs getrieb or “Porsche double-clutch transmission”. Although some enthusiasts lament the departure of the manual gearbox from the GT3 RS, this 7-speed unit is designed to shift in milliseconds while still offering the type of control and precision that befits its goal of being the ultimate track car. After all, race cars have been using dual-clutch technology for decades now, and for good reason.

Underpinning the GT3 RS is more of the incredible magic from the engineers at Porsche. Here, they’ve swapped in the chassis from the wildest of the current 911s, the 700 HP GT2 as well as swapped all rubber bushings within the suspension for articulating ball joints. Why do this? This has the effect of minimizing interference between the driver and the track surface and ensures that the GT3 RS can perfectly transmit what’s happening at the wheels. Porsche has also deftly integrated rear-wheel steering to further enhance stability and agility. The suspension design retains adjustable dampers to make this car as street-ready as possible without watering down its mission.  Massive Michelin Pilot Sport Cup tires help generate a massive 1.24 G (according to Car and Driver) while huge carbon-ceramic (optional) brakes provide dependable, reliable stopping power from triple-digit speeds without fading.

The final element of the GT3 RS goodness is downforce, lots and lots of downforce. Right out of the factory, this 911 utilizes a unique front splitter, functional brake ducts, and massive rear spoiler to stick this vehicle to the ground at high speed.

How Fast Is The Porsche GT3 RS?

So at the end of the day, what does this all mean to you, the driver? So what if the GT3 RS can sprint to 60 in 2.9 seconds and do the ¼ mile in 11 seconds flat? This speed on the street is translated into speed that can actually be used at the track. The concerted efforts from the engineering masters at Porsche means that you can own a vehicle that can be driven to your office and, on the same day, be driven to a race track where it will throw down incredible lap times. How incredible? How about laying down a lap time in 6:56.4 around “The Green Hell”, otherwise known as the Nürburgring Nordschleife. This puts the Porsche 911 GT3 RS 7th fastest in the world! Why is this a big deal?

If you analyze the the top 7 finishes at The Green Hell, you’ll notice that the GT3 RS actually sticks out quite a but for reasons we will cover below:

Top 7 Finishes from Nürburgring Nordschleife (Current as of February 2021)

Sure, there are cars on this list that made their way faster around the track but we need to clarify these finishes in relation to the Porsche 911 GT3 RS. Vehicles like the Radical SR8 are track-focused to a fault and are unusable on public roads here in the United States – track toys and that’s it. The AMG Black Series has 200 horsepower more than the GT3 RS, utilizes a high-boost, turbocharged V-8, and costs over $125,000 more! Same story (minus the boost) for the Lamborghini vehicles, which are ludicrously more expensive, and utilize much larger engines with active aerodynamics to achieve these stunning lap times. Even Porsche’s own fire – breathing GT2 RS utilizes a turbocharged mill and flaunts a price of nearly $100,000 more than the GT3 RS.

What others are saying about the Porsche 911 GT3 RS.

What we have here is a vehicle that is priced like a “regular” supercar (R8, AMG GTR, NSX, etc.) but runs at the pace of the fastest, most elaborate versions of these same supercars. All without the aid of forced induction, active aerodynamics, and other “go-fast” trickery. Plus, it happens to be perfectly liveable on a daily basis!

This is precisely what makes this the ultimate track car and we’re not the only ones who heap high praise on this vehicle:

This is a vehicle that will go down in history as arguably the ultimate Porsche. Is it the fastest? No. Is it the most exotic? No. Is it the best all-around-track car that can be used every day and provides the highest level of driver connection? You’re damn right it is.