The Raging Bull Of Sant’Agata Bolognese

In the world of supercars, Lamborghini has always been, let’s just say, an outsider amongst its rivals. Trading in the stoic Stuttgart swagger of Porsche or the Monaco-laced glory of a Ferrari for a more animalistic, in-your-face attitude; the raging bull of Lamborghini has always been one of a kind. From their rebellious origin story to their transformation from a rich person’s plaything to a legitimate track car; the Lamborghini story is one that pulls at enthusiast’s heartstrings and instantly fires up the 12-year kid in all of us. 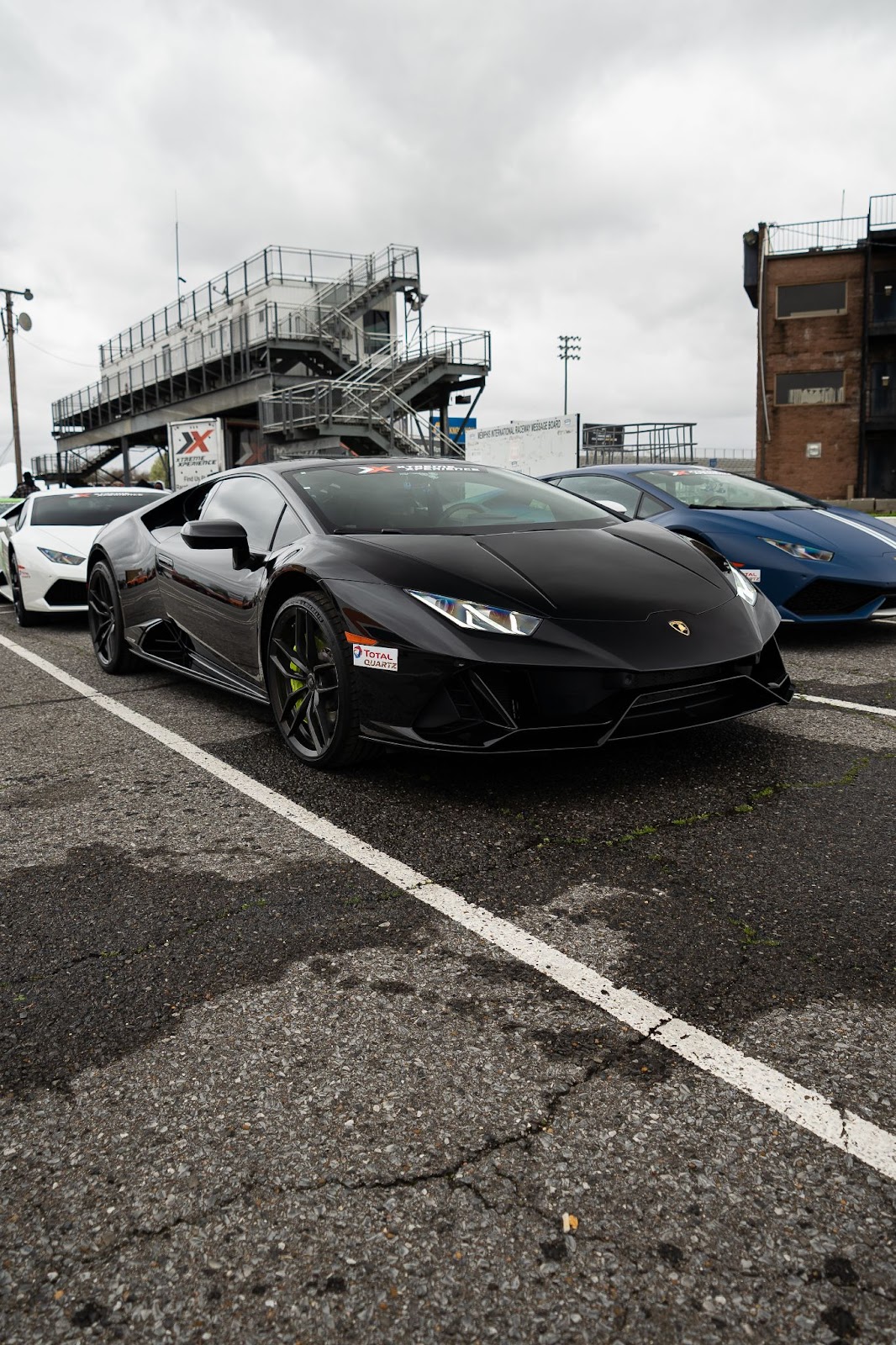 Guess what? At Xtreme Xperience, we happen to have one of the best examples of the Lamborghini mantra right here in our fleet: The Huracan. Not just any Huracan, mind you, but a Huracan that’s designed to take the craziness of a Lamborghini and dial-up it just a few more notches. That’s right, we’re talking about the Huracan EVO!

Strap in for a ride, because we’re going to take you for a ride back to where it all started and then tell you everything about the Huracan Evo that makes it one of the most outrageous vehicles in our fleet:

If you think you’re ready to handle the raging bull, then read on. This is going to be one heck of a ride!

The Birth Of Huracan

To understand the Huracan EVO, we need to take a brief peek into some family history. More like family drama but you know, all good families have a bit of drama and this track-focused machine is no different.

After the 7th sale of Lamborghini as a company (yes, you read that right) the fledgling brand was picked up by none other than Volkswagen / Audi in 1998. Engineers from Lamborghini and Audi immediately got to work on a new engine that would shatter the ears and the hearts of automotive enthusiasts for the next 20 years. What came of their toiling was a powerplant that would prove so potent and so tuneable that it would remain in vehicles to this day. The Audi / Lamborghini V10. To go along with this magnificent motor would be an all-new vehicle, designed to be the entry level in the Lamborghini range. This vehicle, named after a prized fighting bull species, would be known as the Gallardo.

From 2003 – 2013, the Gallardo prowled the streets and tracks of the world hunting down the likes of such legends as the Ferrari F430. To go along with the 493 HP V10 mounted amidships, Lamborghini would also give the Gallardo a trick all – wheel – drive system, exotic dual clutch transmission and a high-end luxury interior. As a street focused supercar with an incredibly ostentatious attitude, the Gallardo knew no equal. However, as a supercar that could hit track and keep up with vehicles like the F430? This was not the chief mission of the Gallardo.

In 2014, the Gallardo was at the end of it’s lifespan and Lamborghini was tired of playing second fiddle to vehicles like the Ferrari 458. They wanted to build something more track focused, more hardcore and more insane than any Lamborghini before it: The Huracan.

The Huracan was the answer to a question that had vexxed Lamborghini for decades. How do we make something that truly competes with Ferrari’s on their own turf? This one, my automotive brethren, was just a little bit of something special.

Bringing The Noise: Natural Aspiration In A Turbocharged World

What changed with the introduction of the Huracan was the first model to showcase Lamborghini’s newfound emphasis on creating outrageous, one-of-a-kind looking supercars that also performed with the best in the business and had the numbers to back them up. To be clear, these vehicles have always been overachievers in the realm of plebian vehicles but among other supercars, Lamborghini’s were often a little cruder, a little louder, and not quite as sharp on a track. The Huracan changed all of this.

What makes the Huracan stand as a performance car is their adherence to a tried and true formula: The 5.2L V10 engine, hooked up to a full time all – wheel – drive system.  In fact, all things considered, there is no logical reason why this thing even exists in today’s world! This engine, oh this engine, it is a marvel of supercar engineering and it will go down as one of the greatest soundtracks of any car, ever. Pushing out a staggering 602 HP in base form and up to 631 in the EVO (more on that in a minute), this engine offers staggering performance at over 120 horsepower per liter. This is the world where elite vehicles live.

All this, mind you, is done without the help of forced induction! That’s right, there’s no turbochargers, no superchargers and no other forms of forced induction trickery afoot here. No, this engine gets its grunt from a combination of deep breathing and lightweight internals that allow this baby to rev it’s heart out. How about a hellish howl at 8500 RPM? That’s exactly how the Huracan gets it done. In the world of performance cars, this is the unicorn of them all and it’s a real treasure.

If you think Lamborghini stopped there. Oh no, no, they had a few more tricks up their sleeve that were unleashed in 2019 with the introduction of a very special Huracan variant.

2019 brought a mid-cycle refresh to the Huracan line-up and with it a brand new variant: The Huracan Evo. Built upon the already completely insane Huracan Performante, the Evo is exactly what it appears to be, an evolution of the formula originally created by the Gallardo: V10 power, trick 4-wheel-drive system, and tons of freakin’ attitude. This is not just a status symbol rich playboys, this is a supercar that puts down handling, acceleration, and braking numbers that are among the best in the world.

Outside, we see a revised look to differentiate the EVO from it’s cousins in the Lamborghini stable. This package consists of a revised splitter and larger air intakes up front; new twin outlets for the sport exhaust system, as well as plenty of active aero, including a new active rear wing. These tweaks offer a 6-time increase in aerodynamic efficiency, a 7-time increase in downforce and a 16% increase in engine cooling. Inside, we see a brand new 8.4” screen dominating the center stack with unique capacitive touch controls that are remarkably well integrated. This alone is a huge upgrade over the tech in most supercars, which is lacking to say the least.

The Numbers Are Insane

Ready for some numbers? The V10 has swollen to 631 HP, ripping through a 7-speed clutch and down into the ground through a torque-vectoring all-wheel-drive system. How about 0-60 in 2.5 seconds and a top speed of 201 soul-crushing miles per hour? 0 – 100 arrives in an incredible 5.7 seconds, the same time it takes a VW GTI to hit 60 MPH. Sure, this monster rips towards the horizon in a maniacal way but where the Evo really earns its place is when that same road goes all twisty where this thing throws down a skidpad figure of 1.12G. This, again, is elite territory.

Lamborghini has designed an incredibly tenacious torque-vectoring all-wheel-drive system that possesses the ability to move all engine power to one wheel of the Evo. Why does this matter? This system allows the Evo to feel connected to the road, yet completely light on its feet! Connected, nearly transparent front grip, complimented by outrageous corner exit capabilities. High speed corners are no match for the active aero and enhanced rear diffuser.

Rounding out the handling upgrades is rear-wheel steering, allowingthe Evo to handle like it’s on rails by counteracting front steering angle at both low and high speeds. Front and rear wheels angled in opposite directions virtually shrink the wheelbase of the Evo and allow enhanced high-speed transitions that work with LDVI (Lamborghini Dinamica Veicolo Attiva, Lamborghini Active Vehicle Dynamics) to precisely control every piece of the handling puzzle.

This is a Lamborghini that’s most at home on the track.

Take On The Bull

Think that you’re ready to take on the raging bull that is the Lamborghini Huracan Evo?

Xtreme Xperience allows you the opportunity to come test your mettle with us and push the Evo to its absolute limits. We’ll help you make the most of the Evo’s power and precision by pairing you up with one of our driving instructors, who’ll teach you everything from how to take a proper line around a track, to when to brake and when to push it just a little harder. This is a machine that is made to make the most of a properly trained driver and at Xtreme Xperience, we’re here to make your dream into an experience that you will never forget.

Come join us at an event near you soon!