Close your eyes and try to imagine this moment for just a second.

It’s 1966, and you’re Bruce McLaren. Yes, THAT McLaren, and you’re piloting a hair-trigger race car in arguably the most challenging race on the planet, 24 Hours of Le Mans. You spent years driving, building racing teams, and avoiding death at nearly every turn. You’re driving one of the most famous racecars ever produced (although you don’t know that yet), and you happen to be winning against the juggernauts of 1960s track racing: Ferrari.

In the midst of all this drama, right in the middle of switching out drivers, a man named Carroll Shelby pops his head into the screaming hot cockpit of your GT40 and yells in your face “Go Like Hell!” Eyes on the prize, propelled by gasoline and pure grit, you take off from the pits and rejoin the insanity. In case you don’t know, Ford and McLaren didn’t just win that race, they finished with a stunning 1-2-3. To call this win an upset would be an understatement, and it put the titans from Maranello, including Enzo himself, on the defense for many years.

Behind this world-challenging racing effort was none other than Caroll Shelby. That grit, commitment, and talent endured in nearly everything that Carroll Shelby did through his insanely illustrious career. Take one look at the madness that is the GT500 and you can almost feel the energy of those screaming 1960’s spec race cars oozing from every ounce of this modern muscle car titan. 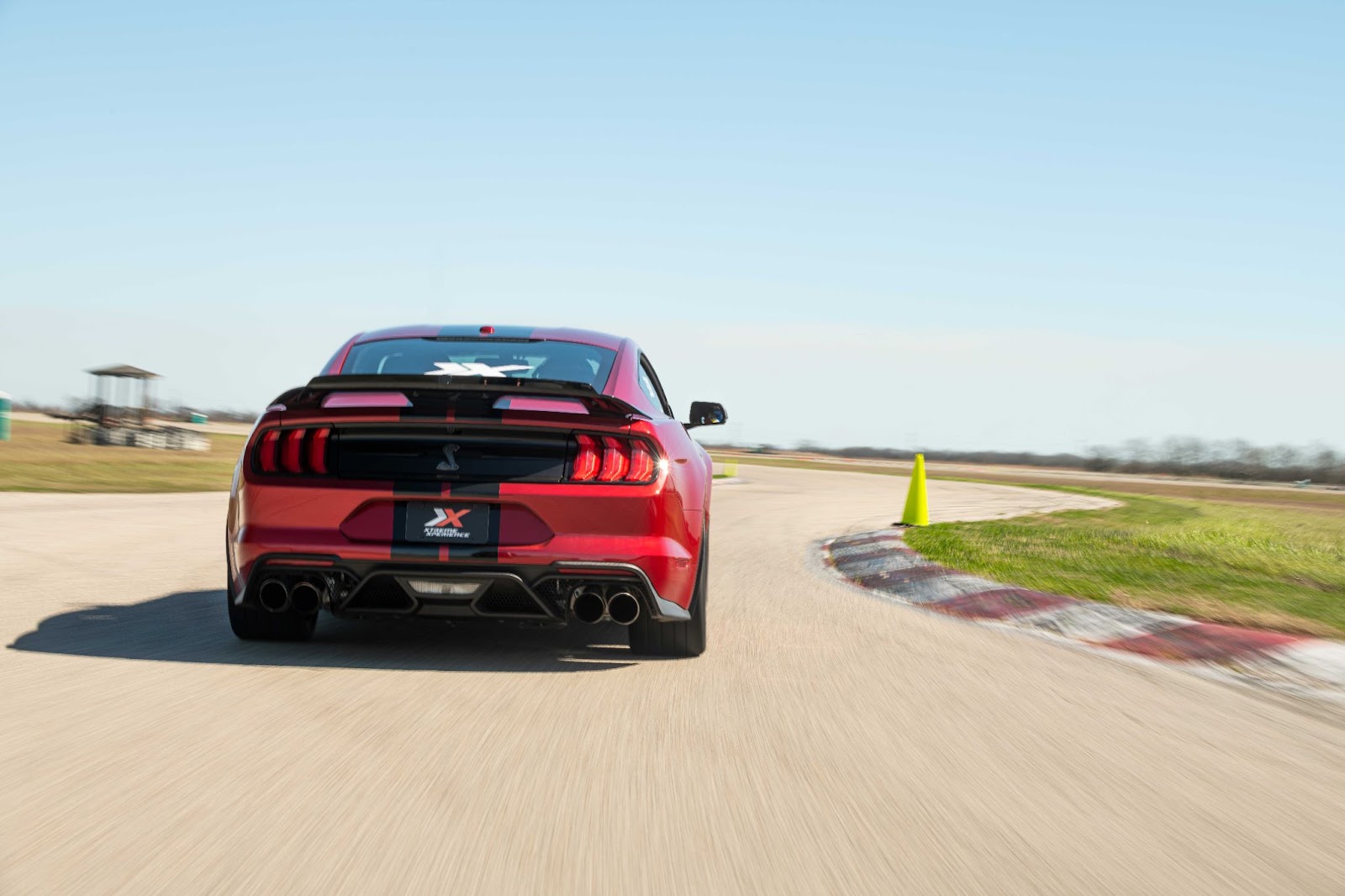 We have one in our fleet and my word. Talk to anyone who’s tried to tame this long-lost cousin on the LeMans winning GT40 and they’ll tell you that this Mustang has the chops to beat the world’s best supercars.

Have your doubts? Read on to learn more.

Well, let’s just start out by saying that the Shelby GT500 happens to run the most powerful street-ready V8 engine Ford has ever produced. Yes, at 760 horsepower and 625 lb-ft of torque, this supercharged V8, internally dubbed “Predator”, is the most torque-dense V8 ever produced. Unlike the massive lunks found in the litany of Hellcat models, Ford extracts all this power from a relatively small (for an American V8 that is) 5.2L of displacement. That extra 300 horsepower over the lesser Coyote engine is courtesy of an Eaton Supercharger huffing in over 18 PSI of boost. 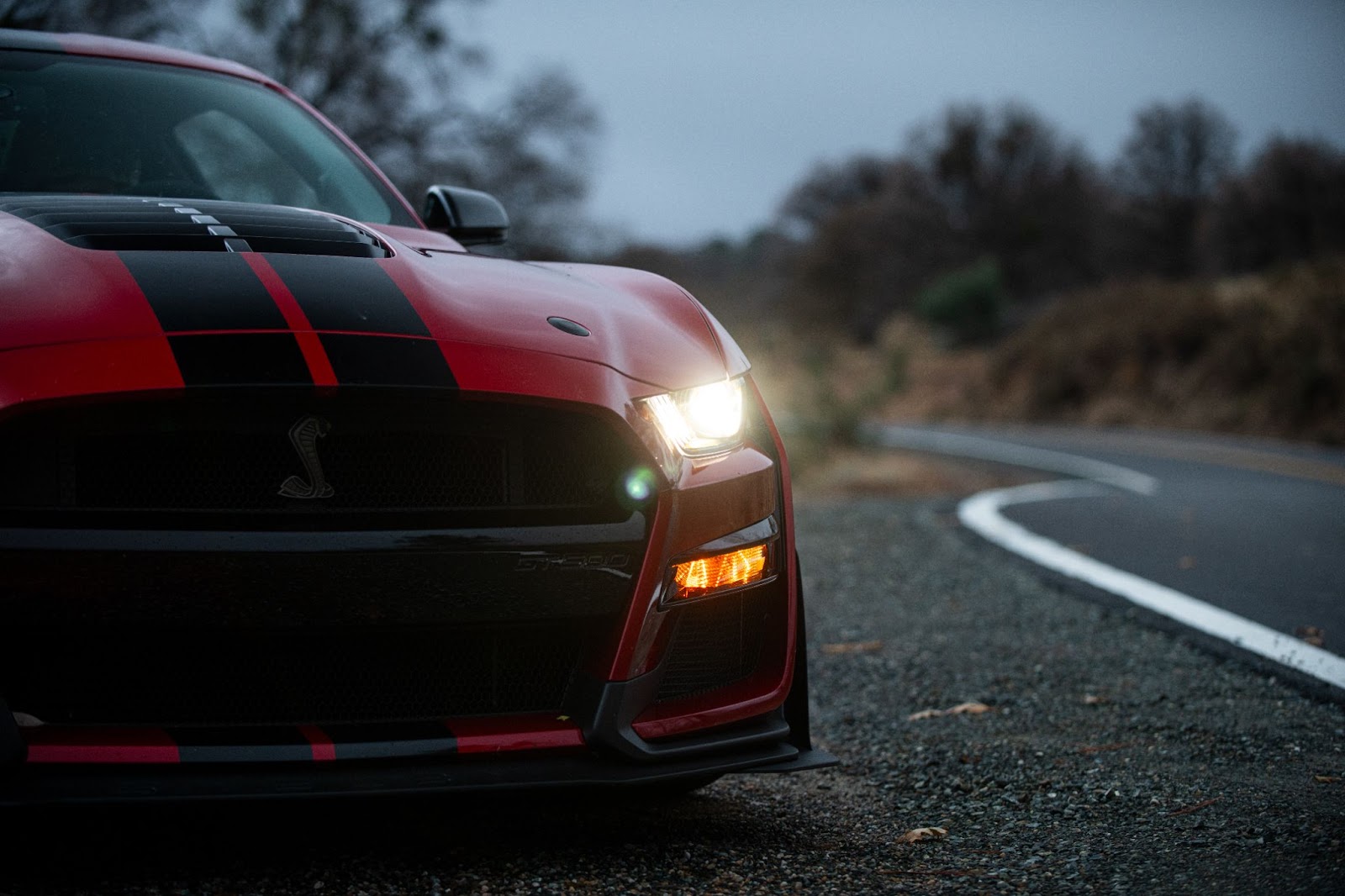 Hand-built by one person on the assembly line in Romeo, the Predator is built on the Coyote architecture but makes several big changes over the smaller 5.0 found in other Mustang models. Much like the smaller Coyote, the Predator utilizes an aluminum head and aluminum block that offers lightweight and strength. In addition, Ford includes weight-saving wire-arc cylinder liners plus larger forged connecting rods, improved lubrication, and unique cooling passages. Even the oil pan contributes to engine rigidity and includes a trick oil baffle system that prevents oil starvation during track days. Unlike the VooDoo in the GT350, Ford does not include a flat-plane crank on the GT500, yet, this motor still willingly pulls to 7,500 RPM.

Other cool bits include a supercharger that’s nestled in the valley of the V8 to encourage better weight distribution and a lightweight, racing-style carbon fiber driveshaft that pushes power to a limited-slip differential in the rear.

All in all, this is one of the greatest engines ever produced by any automotive company and its sound alone is worth the drive.

A Dual-Clutch Muscle Car That Can Handle

To prove that the GT500 is more than just a muscle car, Ford installed a somewhat controversial transmission to go with this incredible powerplant. No, there is no manual transmission (which is great for us, read here to learn why) but instead of the manual, we have a 7-speed dual-clutch transmission from Tremec. Not just any Tremec dual-clutch, no, the dual-clutch from the legendary Ford GT supercar. In a muscle car? You’re damn right!

What that means for drivers is a world-class transmission that can shift in 100 milliseconds, faster than the blink of an eye, and deliver a nearly transcendental driving experience that is about as far from a traditional muscle car as you can imagine. To go with this brilliant gearbox, Ford also offers various drive modes which alter the personality of the entire drivetrain dramatically. For what it’s worth, this gearbox is good as anything you’ll find in any member of our supercar fleet.

So, we have the engine and the transmission covered, but what about the handling? This is perhaps the single biggest surprise of the GT500 experience. Sure, the latest generation of Mustangs are no slouch in the corners, but the GT500 takes it up even further. In another Mustang first, Ford includes their excellent MagneRide™ suspension that’s activated via a driver-selectable series of drive modes. From comfort to track, this thing is dialed in the corners but doesn’t necessarily beat you up in daily usage.

To further the insanity, Ford equips every GT500 with huge 16.5 Brembo steel rotors that are not only strong but nearly fade-free at speed. Add in the optional track package and Ford will throw in a set of tricked-out carbon fiber wheels that will have owners avoid every curb and pothole with extreme diligence. Wraps all this up with a set of sticky Michelin Pilot Sport Cup tires (usually found on exotics) and you have a world-class handling experience that positively wipes the floor with other American competitors.

So, what do you think? Do we have you hooked yet?

Well, if you’ve got any appreciation for American muscle, the Ford GT500 is what you want to drive and we happen to have one that’s ready for your right foot and your nerve. We take the GT500 and a host of other incredible vehicles to some of the best tracks in the country and put car-crazy folks like you behind the wheel. Our racing instructors will tell you everything you need to know to extract the maximum amount of speed from the GT500, exactly where it belongs, on the track. Open up that 760 horsepower on the straights, hammer those big Brembos into the corners, and let the fully adjustable, magnetic ride suspension help you maintain your line.

If this sounds like your kind of day, come see us at an event near you this season! Bring your family, friends, co-workers and anyone else you think will have a great time taming the Shelby GT500. We’re here to make this a day you’ll never quite forget!

See you at the track!