Let’s just get this out of the way upfront; there are fewer vehicles on the road with the absolute, menacing presence of the Dodge Challenger Hellcat. From the absolute second any car loving soul lay eyes on the 1960’s inspired looks, they’ll immediately go weak in the knees, and that’s before the sound assaults your eardrums. Yes, we said assault, and we do mean assault. It’s like being punched in the face with a raging staccato of gasoline-driven punches that are made to make you yield, and yield, you do.

We all know this incredible vehicle has a bad-ass quotient that’s legendary in the car community but its origin story and its path to pure lunacy are what make it one of the absolute favorites in our fleet.

If you’re ready to step into the realm of insanity, so are we. Let’s do this! 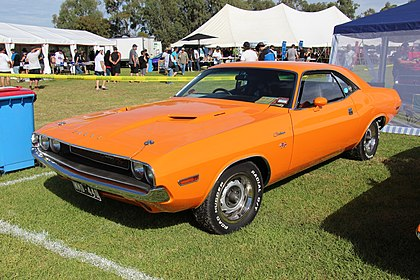 The 1960s were an incredibly interesting time in the history of not only our country but the world as well. War was a stark reality that was becoming increasingly commonplace, the civil rights movement was raging and life was becoming ever more complicated. Life in America was a measure of balance, every event had a counter-event and the youth of this nation were caught right in the middle. This was the perfect time for the introduction of escapist machines that would go on to define not only an entire generation but many future generations as well.

We can banter on about what the first muscle car was but after the introduction of the Ford Mustang, the floodgates opened and Detroit’s best began to pour out model after model and began to compete with each other for supremacy. There wasn’t just one muscle car offered by each manufacturer; each brand had muscle cars to fill low price, mid-price, and high-price tiers in order to appeal to a wide variety of drivers and budgets.

Introduced in 1970, the first generation Challenger was made to compete on the high end of the muscle car spectrum with the likes of the Mercury Cougar and Pontiac Firebird. The design was evolutionary and heavily based on the Dodge Charger that was introduced in 1966. Take one look at this 1970 RT and you can see that the modern Hellcat really didn’t stray much from this original design. Retro in the best way? Yeah, we think so too.

We could spend 1500 words just talking about the insane number of engines available in the original Challenger but let’s just say, there were A LOT and at the time of the lineup was a 440 Cubic Inch monster (7.2L) that was putting out “around” 390 horsepower. According to those that know, they lied to help owners save on insurance and it was really around 500 raging ponies. 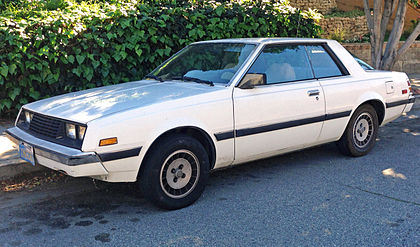 The Challenger came to the muscle car game way too late to really have an impact because, by 1971, sales had crawled to a near halt. By 1974, the first-gen Challenger bit the dust, and would not resurrect itself until 1978 when the “Malaise”’ era was in full swing and there was a definitive lack of passion in the automotive world. Marketed as a Challenger, the second generation was really just a rebranded Mitsubishi Lambda coupe with a maximum of 105 horsepower. Meh.

We would not see another Challenger debut for a stunning 30 years. While brands like Chevrolet and Ford continued to refine their muscle car formula and build legions of fans, Dodge really didn’t have anything to bring to the party. Credit years of bad decisions from poor 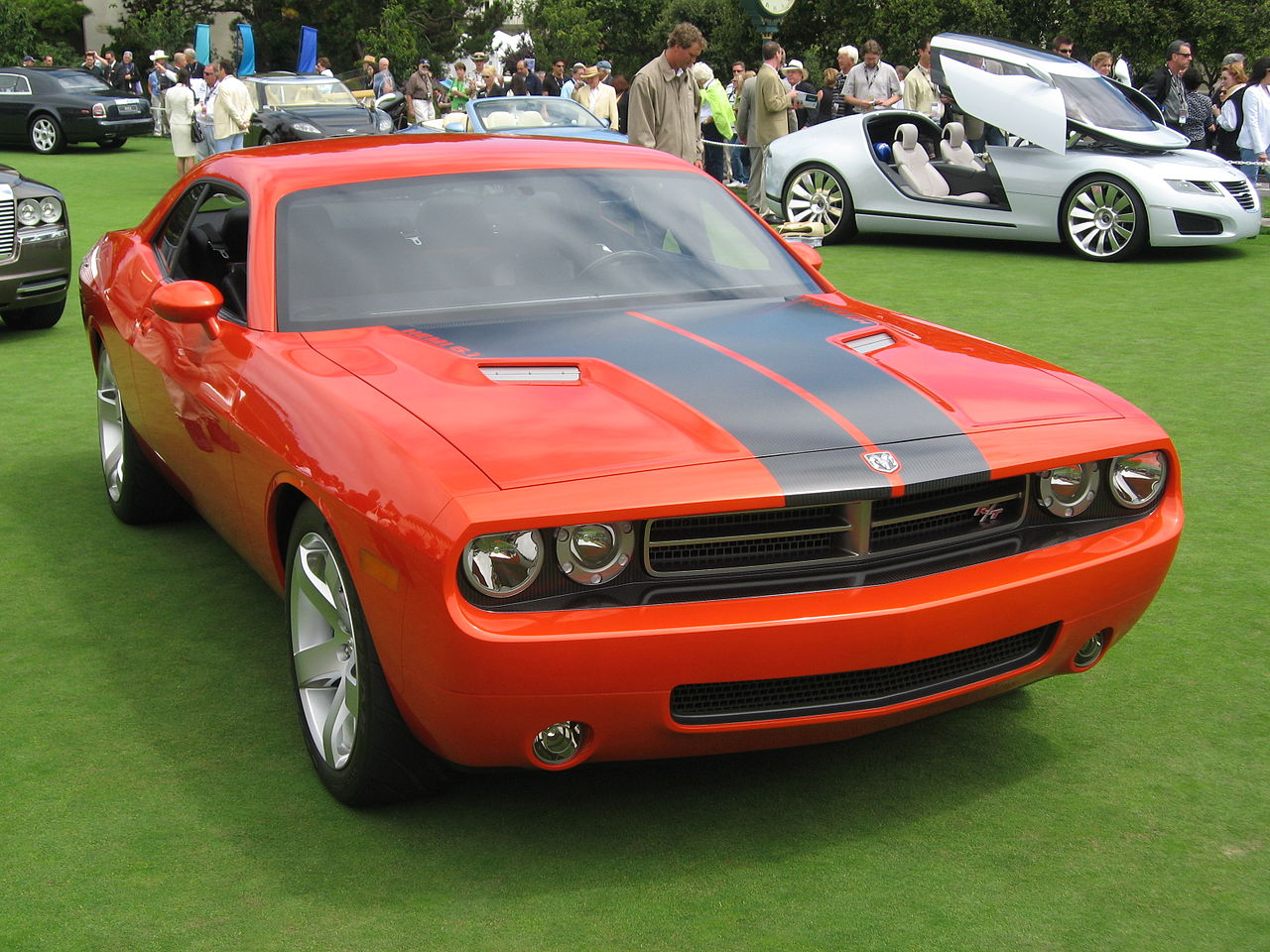 leadership, mergers, and a lack of general direction for this blunder but in 2008, all was forgiven.

Debuting at the North American International Auto Show in 2006 as a concept, the 2008 Dodge Challenger included several clear throwbacks to the original 1970 model, including a variety of engines. Originally, the Challenger was available with a V-6 and a 5.7L HEMI V8, and later down the line, an SRT trim would see a 6.4L V8 join the lineup.

Critical reception and public reception were a knock-out hit for Dodge, and it immediately reentered the modern muscle car wars along with the equally throwbacky Mustang and Camaro.

Much like the 1960s and ’70s; Domestic manufacturers were in a battle for muscle car supremacy that meant car enthusiasts like us got to grab the popcorn and watch the madness. Once Ford announced an upcoming 600+ horsepower version of their Mustang (Shelby Cobra) the engineers at Dodge clearly had to have a clap back. According to Chris Cowland, head of SRT at the time, “We built it because we could…We wanted to make a statement and move the brand forward,” and move it forward they did. Shrouded in absolute secrecy, the Hellcat project (named after a fighter plane from WWII) was a battle between the bean counters and the same group of enthusiasts who produced vehicles like the Dodge Viper.

What came out of this project was nothing short of legendary. Debuting in 2015, the Dodge Challenger Hellcat positively barnstormed the automotive world. A staggering 707 horsepower, 6.2L HEMI V8 that’s preposterously fed through a massive supercharger huffing 11.6 PSI pushed power out through an 8-speed automatic that ripped off shifts like an Italian supercar. Everything on this incredible engine was reinforced, strengthened, and ready for action (including diamond plated washers – what!?) Repeated runs down the drag strip in 100+ degree heat? Yeah, the Hellcat can do that all day long. Massive tires, massive noise, massive everything. It was an assault on the senses and it was sensational.

Performance? How about 0-60 in 3.6 seconds and a 111.7 sec @ 125.4 mph and a stonking 109 foot stop from 60 MPH. Yes, but does it handle? Well, that’s not really what the Challenger was designed to do, that is until 2018 when another version of the Hellcat was developed for those that were looking for a little more.

Claws Out On The Track

To give the Challenger Hellcat more track-focused capability, the SRT engineers created a unique package known as the “Widebody”. The reason is pretty simple, this monster is actually wider than the stock Hellcat due to the insane tires fitted to all 4 corners and the subsequent bodywork required to cover the massive 305 width, Pirelli P Zero shod wheels. These tires are so big that they can’t even roll down the assembly line! To compensate for the additional grip generated by these huge tires, the Widebody also rocks a recalibrated adaptive suspension system, and a recalibrated steering system to go along with it. Those huge Brembo brakes and the rest of the Hellcat package continue on unfettered.

The result is nothing short of shocking, as these suspension and tire upgrades turn the Hellcat from an understeering drag strip queen to a bonafide track car that has a benign demeanor and distinctive lack of understeer. These characteristics can be a bit terrifying since, you know, this is a 707 horsepower, rear-wheel-drive vehicle but if you have the nerve to keep your foot in it and ignore the massive weight of the Hellcat, it will reward you in spades.

Plus, it looks positively sinister just sitting still. Yes, we like this vehicle more than we care to admit and so do our customers.

Conquer The Hellcat With Us

If you feel a little terrified when looking at the Challenger Hellcat, we don’t blame you one bit. With 707 horsepower on tap, small gun slit windows, and that massive hood; this is an intimidating ride. Lucky for you, we happen to have some of the best driving instructors on the planet and they’re ready to show you exactly how to make the most of this Widebody masterpiece out on the track. Your pulse will pound, and your brow will sweat but once you’re done conquering the Hellcat, you’ll be ready to do it all over again. Check your schedule, because this big cat is coming to a track near you soon!

Think you’re ready? So do we.